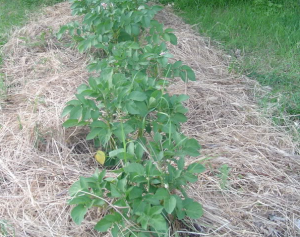 During the course on How to create an eco-friendly vegetable garden with Sergio Abram (April 2011) we decided to spare 3 vegetable beds for growing potatoes (Kennebeq variety).

After preparing the ground and building the bed, we planted the potatoes and covered them with a little of straw. Potatoes don’t need to be covered with ground, instead they need darkness. The distance among potatoes was 40-50 cm and the bed had an irrigation system that provides water during the whole growing phase. Potatoes don’t need any care, or at least that’s what we thought.

What was the result?

We planted almost 15 kg of potatoes and at the end we’ve got 3 wheelbarrows of potatoes (we couldn’t wheight them) sorted by:

a bit ruined potatoes (to be eaten shortly),

green potatoes (they are toxic and cannot be eaten, so we will keep them and plant them next year).

What we are going to do different next year?

We planted the potatoes at the right time, but they need to be covered with much more straw and we will have to add some more if it doesn’t provide enough darkness. Also, when potatoes bloom watering is no longer necessary, otherwise they are likely to rot.
It’s advisable to have a separate section of the irrigation system especially for the potatoes beds. Finally, we are studying different ways to prevent water voles to eat potatoes. We will try by planting Euphorbia and Fritillaria.

In April we planted again red, white and yellow potatoes, but in a different area. This time there was no irrigation system.
A part of the potatoes was planted in the traditional way by preparing the ground and burying them. Another part has been covered with straw, so we will also be able to compare the two methods.
We will let you know soon how did it go.

SILENT RETREAT: the magic of silence

THE IMPORTANCE OF WATER in Permaculture and not only…