The story of Charles, Perrine and their farm

Miraculous Abundance it’s not only the English title of the book published in 2014 by the French couple Perrine and Charles Hervé-Gruyer, but it’s also the perfect summary of the results of their project and the message they want to send with passion to all of us and to all future generations of farmers. Charles and Perrine’s story is heart-warming and it provides inspiration to those who look for a change and hope to those who see ahead an ever greyer future. But who are Charles and Perrine? And what did they do so special?

In 2006 Charles and Perrine established an organic farm called La Ferme du Bec Hellouin, in Normandy, and decided to become farmers, living off the products they’d have cultivated and sold. So far, nothing special if it wasn’t for the fact that none of them had any kind of education in agriculture, they hadn’t even set foot in one organic farm before. Indeed, for many years Charles had been a sailor and researcher who came into contact with the most diverse indigenous tribes of the world; while Perrine had been an international lawyer, living in Japan for several years.

To add even more difficulties to the many challenges already present, Perrine and Charles decided that their farm wouldn’t have been an ordinary organic farm, as they didn’t want to use any machine to work the land or to harvest its fruits. They would have counted only on their physical strength and the use of few animal traction. Moreover, they wouldn’t have used plastic to cover the fields (plastic use is very common in organic agriculture for limiting the growth of weeds), instead they would have looked for natural and non-polluting alternatives.

The authors don’t deny the many initial difficulties, the mistakes made due to inexperience and the moments of discouragement they went through. However, they also write about their perseverance, their faith in the project and the many external supports that guided and helped them to go on.

The turning point of permaculture

Then, the turning point. In October 2008 a friend sent to Charles and Perrine an article that introduced them to a new concept: permaculture. They started to learn a method based on the observation of natural ecosystem functions (that by definition are sustainable, self-sufficient and resilient) and it allows to take them as models in order to create more independent, sustainable and efficient human settlements.

So, they started to design their farm following permaculture principles: they created raised beds, a Mandala-shaped synergistic vegetable garden, a few terraces, a forest garden and they even manage to re-fertilise the West area of the farm that had been characterised by a very poor and rocky soil. They also created a system of small lakes and two islands, soon converted into vegetable gardens too.  The authors learnt that in permaculture the waste produced by any activity becomes a precious resource for another one and even the so-called “weeds” are no longer seen in a bad way (Charles at some point refuses to call them “weeds”), but they are treated as pioneer plants, with their own function. An example of this is nettle that with its high content of nitrogen and minerals, becomes an excellent mulch for the raised beds.

After that, Charles and Perrine didn’t stop researching on alternative farming, so after Bill Mollison, David Holmgren and Sepp Holzer (permaculture), over the years they also studied the work of John Seymour, John Jeavons, Eliot Coleman, Mokichi Okada, Masanobu Fukuoka and the Parisian farmers that in the XIX century, developing the technique of the so called “market gardens”, allowed the whole city of Paris to be food self-sufficient all year round.

It might seem like Charles and Perrine didn’t invent anything, but their merit is represented by the undeniable practical ability to put together all such influences in order to promote the concept of “ecologic agriculture” which stands between permaculture, in the way it was conceived, and the construction of a cultivated and inhabited landscape that highlights professional intensive organic farming on a small piece of land.

Small, well-maintained and hyper-productive: it’s the vegetable garden of the future

It’s important to underline that La Ferme du Bec Hellouin doesn’t have a great extension (almost 2 hectares), but its productivity is unmatched. The authors insist a lot on this concept: a small but well-maintained land is far better than a big but neglected one – there’s no need of a wide extension to get a miraculous abundance! In traditional agriculture it’s common belief that more the land equals more productivity, but this is a convention that will have to be demolished in the near future.

Today traditional agriculture is strictly dependant on oil and machines: for example, it’s impossible to plant different species on the same cropland because machines wouldn’t be able to harvest them, plants have to be at a certain distance from one another (which usually it’s the distance required by the machine), etc. However, when in few years oil won’t be so available anymore, we will have to deal with this reality. And what’s the advantage of humans if compared to machines? The answer lies in their versatility and the ability to harvest even completely different species that share the same cropland. In this perspective, the authors see in the spreading of micro-agriculture also an environmental, economic and social receipt of wellbeing that can offer a brighter prospect to the many challenges that the near future presents to us.

The results reached through the passion, tenacity and vision of this couple are extraordinary: today La Ferme du Bec Hellouin counts more than 500 varieties of fruit trees, about a hundred berry trees, many varieties of vegetables and herbs, as well as an enviable diversity of animals, insects and birds. So, the key word is biodiversity, which is observed not only by the authors of the book, but also by agronomists and researchers that in these years have cooperated and carried out studies on La Ferme du Bec Hellouin.

Finally, Charles and Perrine’s success is not limited to the fact of having built a wonderful place in which they also live and work. Indeed, due to the increasing requests of visits, information and courses, they have also given life to an education centre in which permaculture courses are held, alternating theory and practice. At La Ferme du Bec Hellouin it’s possible to experience production, research and education all in the same place, an opportunity that attracts several hundreds of people every year.

At some point in the book, Charles and Perrine wonder if it’s possible to create a post-oil society which combines the harmony of the early people with the technical and cognitive innovations of modern age. We think that they are on the right path and we wish that their example could become a replicable model more and more often! 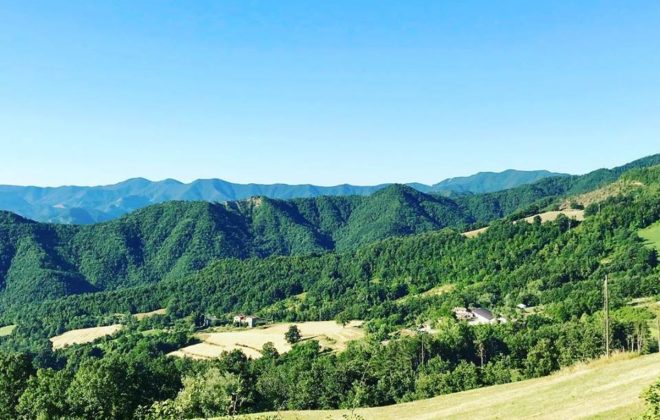 RE-start taking care of the world