Biochar: a resource for a more sustainable agriculture

Biochar is charcoal made from wood or biomass via pyrolysis, a process in which the thermal decomposition of organic materials takes place without involving the addition of other reagents such as oxygen.  In few words, heat is provided to the organic materials in an inert atmosphere in order to create the energy necessary for breaking some chemical bonds within complex molecules and convert them into simpler ones.  The result is biochar, a charcoal whose carbon content is up to 90% and whose compact structure make it non-biodegradable by soil
microorganisms. For this reason, biochar can stock carbon instead of releasing it into the atmosphere as CO2.

But why are we so enthusiast about biochar here at La Fattoria dell’Autosufficienza?

This means that it has positive effects on soil fertility where it’s buried, improving its physical, chemical, biological and mechanical properties thanks to its high permeability. Moreover, it provides structure to the soil, making biochar a potential resource for overcoming some of the greatest limits of the ground, such as sandy soil.
By improving soil fertility, also crop production increases and this effect goes on for such a long time that it hasn’t been defined yet. In some regions of Brazil, for instance, there are pieces of land particularly fertile because indigenous people buried biochar in them as fertiliser some thousands of years ago.

A greater fertility translates into a greater efficiency of performing photosynthesis, a greater biomass development and, therefore, a greater carbon sequestration. Carbon dioxide gradually accumulates in the soil instead of being released into the atmosphere and this makes biochar a very useful resource in mitigating CO2 emissions coming from human activities.

It allows to save water

Its permeability increases retention of water and nutrients that in this way remain available for plants for a longer period of time.
Obviously, an increase in water capacity of the soil will make irrigation less necessary. Moreover, its presence in the soil prevents the leaching of nitrates and sulphites due to heavy rains, protecting groundwater and soil fertility at the same time.

It can be used to clean up polluted fields

An interesting feature of biochar is the ability to absorb and retain long-lasting and carcinogenic pollutants. For this reason, biochar is potentially useful in land reclamation works on metal-polluted fields, as well as in water treatment.

It can be used in compost production

Burying biochar in cultivated land is not the only way to employ it in agriculture. Indeed, biochar can also be used for compost production. According to recent studies, adding biochar during compost production reduces time, greenhouse gas emissions (methane and nitrous oxide), ammonia losses and unpleasant smells, as well as acting as filler material for the compost pile. At the same time the composting process enriches biochar with nutrients without affecting its structure.

If used in the right amount, biochar accelerates the composting process by mainly improving uniformity and structure of the mix of organic materials and by stimulating microbial activity (it acts both as shelter and catalysing agent). The increase in temperature that originates from this greater microbial activity translates into shorter times for compost development.

Biochar’s permeability allows it to absorb a greater quantity of water, reduce the density of composting mass and ease air circulation. Even so, it will be necessary to turn over the compost piles, add water and monitoring as usual. However, the use of a small amount of biochar can make the work much easier.

Also at La Fattoria dell’Autosufficienza we wanted to try producing compost with biochar. In order to achieve that, we used a mix of manure, straw, crumbled bran, yeast, sugar and ash, as demonstrated by the pictures below, taken on May 8th, 2018. Of course, we will keep on updating you in the coming months on this little experiment of ours!

The right tools for market gardens and no-till agriculture 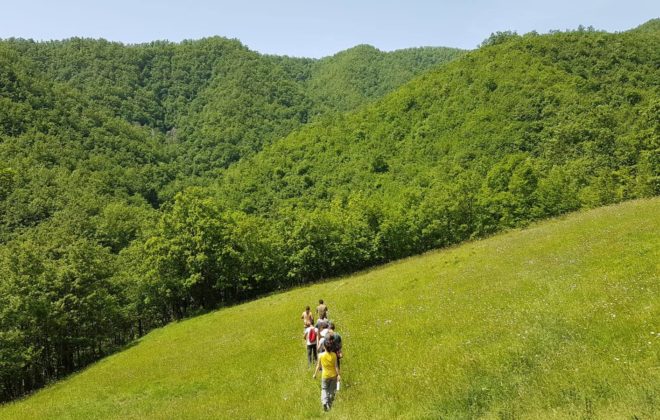