Home > News > Permaculture > How to turn desert into paradise 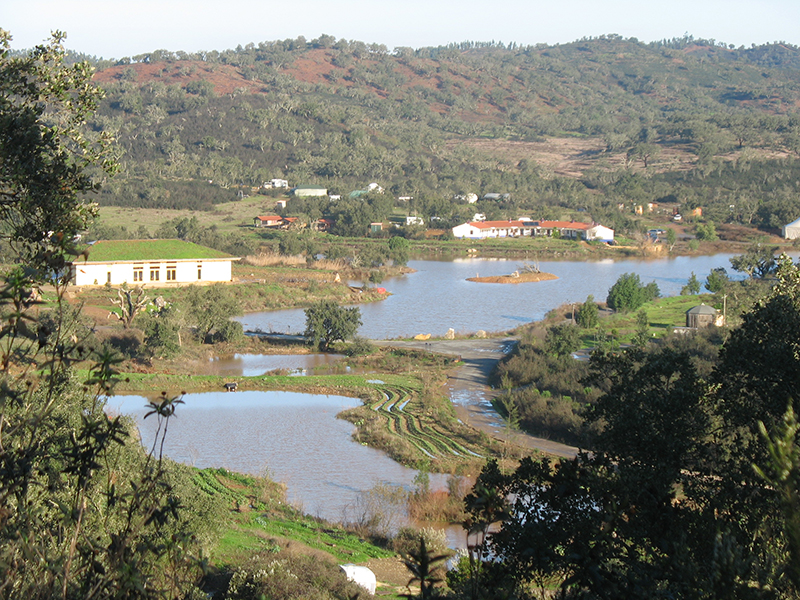 It was 2011 when I decided to visit Krametherof, in Longau region, Austria. I’d been astonished by the vision of a documentary about Sepp Holzer, the rebel farmer that transformed his family land into a natural paradise. He has constructed an impressive system of 80 lakes and terraces on a steep piece of land between 1100 and 1500 m.a.s.l.

The first contact was through the website, where I asked information for visiting the farm. We agreed that I could visit them with a small group of people and a translator, so I started to ask around. Back then there were no books in Italian on Sepp Holzer and no Italian website that talked about him, but even so, soon I gathered a group of 20 people willing to leave with me. When we arrived Andreas, Sepp’s son, received us and for 4 days we alternated visits of the farm, lessons and explanations of Sepp’s permaculture projects.

I will never forget what I saw there. At Krametherof I understood that it’s possible to do farming and create beautiful landscapes at the same time, even in challenging places where, at first sight, every effort could seem vain. I understood that managing water in a smart and natural way can change the world and especially that it’s possible to help life getting back to deserts.

The really special thing about Sepp is that after creating a paradise in his land in Austria, he started, as a consultant, to create paradises in every region of the world, achieving great results even in deserts, one of the major  plague of out times.

After creating a paradise in his land in Austria, Sepp Holzer started, as a consultant, to create paradises in every region in the world

Fighting desertification is possible with Permaculture

The process of desertification is global. It’s so dramatic that, according to UN, it has already caused the loss of one fifth of croplands worldwide. South American and Indonesian rain forests are turning into desert more quickly that we can manage to study their animal and vegetal species. Even those that nowadays are deserts, in ancient times used to be fertile regions: Sahara Desert, for instance, used to be a green savanna in which humans could live well. In the process of desertification vegetation and soil life get poorer, the soil gets dry, the phreatic level become lower and the erosion of fertile land increases until hummus disappears and what is left is just sand. Cultivation becomes harder and, as a consequence, farmers leave their land.

Also in Italy the situation is dramatic. Summer drought is increasing, while deforestation and monoculture reduce soil ability to gather water. Suffering vegetation can no longer provide enough shadow to the land that, at this point, is warmer than rain water. If it rains, humidity no longer penetrates deeply, but it forms small raindrops on the surface of the ground. Soil gest hard, so the strong winter rainfalls can no longer permeate it and, as a consequence, they scour the ground transporting hummus in valleys, rivers and the sea. What’s left behind is sand and rocks. Trees die, fires break out, farmers leave the fields and entire regions lose their population. According to Sepp Holzer, this process can be stopped and in many occasions, such the ecovillage of Tamera, Portugal, he demonstrated it with facts.

Tamera’s ecovillage and the end of desertification

In March 2007 Sepp Holzer was invited in Portugal for a consultancy at the ecovillage of Tamera. The challenge was to create a model of healthy fruit and vegetable production for 300 people on a surface of 150 hectares, in a dry landscape tending to desertification such as Southern Portugal. Since the beginning, Sepp’s proposition was to create a water-based landscape of at least 10 lakes and retention basins. In such an arid territory the most important thing is preventing desertification and creating enough retention basins for rain water.

For the first lake, located in the narrowest and deepest area of the valley, an arched bank was erected and adapted to the landscape. To create that, a great pit was dug into the ground at a depth of 5 metres and partially covered with a waterproof layer of loam. This layer was running also on the slopes and was completed with an embarkment on both banks. Special attention was put on the slopes, whose inclination cannot be more than 1:2, because only in this condition can vegetation grow. Finally, the slopes were planted.

The material for the banks was taken from the future lake area. The deepest point of the first lake is 12,5 metres. The different ground layers couldn’t be mixed, so they were separated right away: loam for the waterproof layer and hummus for the future cultivated slopes. The construction works of the first lake were finished in the autumn of 2007 so that winter and spring rainfalls could gather within the banks. Initially, water filtered to the subsoil in order to reintegrate the invisible underground reservoirs. Even after 2 dry winters in a row, the lake had formed and gradually covered the landscape. After the first lake, many other retention basins followed in the coming years. 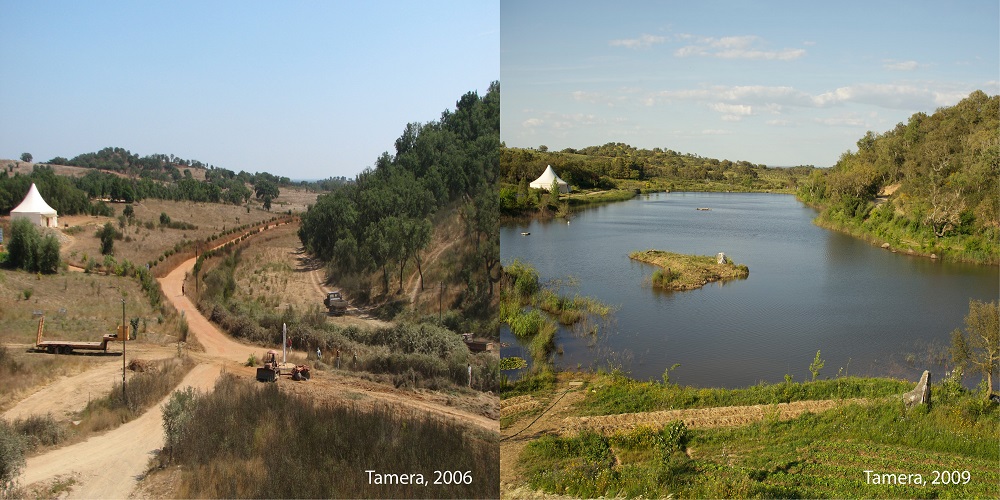 Meanwhile, the fruit trees that had been planted on the terraces had a great growth, as well as the forest fruit bushes. A wide variety of vegetables and fruits are growing at their feet today. On the terraces that reach 18 metres of width and are crossed by pathways, a beautiful forest garden will develop.

In this way the terraces will also become green areas that can be visited while trekking or horse riding. Now even in summer, when temperatures reach 40°C, there’s a protected microclimate, with a wind tunnel that creates the right conditions for cultivating vegetables and officinal herbs.

This demonstrates that it’s possible to design terraces that surround a lake as very beautiful and very useful landscapes. It’s obvious that plants in the terraces get many advantages from the lake: water, sunlight exposure, air humidity, dew, they all have positive effects on plant’s growing. In intensively cultivated pieces of land, that need to be watered in summer, a drip irrigation system was placed which takes water directly from the lake.

Lakes and ponds can be very productive and profitable, even more than croplands. They can be used for fishing, growing water plants, breeding courtyard animals and Indian buffalos, but also for touristic purposes. Nowadays lakes are fundamental, so it’s impossible to imagine how would be Tamera today without its lakes.

After visiting Krametherof and after having a look at Sepp’s amazing projects such as Tamera, I decided to have Sepp’s book translated and published in Italian and I invited him at La Fattoria dell’Autosufficienza, so that at least part of his great knowledge could affect also our territory. This happened in 2016, when Holzer, after 3 days of consultancy for La Fattoria, held a 4-day course of permaculture that was attended by 30 people. Obviously, we received a lot of inputs and soon also La Fattoria dell’Autosufficienza will have its lakes and its paradise.

How we started a Food Forest in Italy