by Sonia Collinelli 04/10/2018
Things to do, Tourist attractions

Among the most interesting hiking trails of National Park of the Casentino Forests you can explore during your staying, we recommend those that reach the spectacular Acquacheta waterfall.
Acquacheta is a stream in the province of Forlì-Cesena, an affluent of the Montone river that originates in the Tuscan Apennines.

Before passing through San Benedetto in Alpe, where it joins river Troncalosso and together create river Montone, it falls down a big cliff of sandstone in a beautiful waterfall. The crystal clear water of the stream is divided in thousands of gushes and noisy rivulets by the rocks.
The height of the waterfall is around 90 meters and this makes Acquacheta one of the highest waterfalls of the Northern Apennines. It is surrounded by a forest of oaks, chestnut trees, beech trees and evergreen vegetation. Acquacheta became very famous thanks to Dante Alighieri, writer of The Divine Comedy, who lived in this area for a long period of time. He was so impressed by the noise of the waterfall that he compared it to the noisy waterfall of the infernal river Phlegethon which divides the seventh from the eighth Circle.

There are 3 different hiking trails you can chose among depending on your physical condition and the weather. Indeed, the trails are often exposed to the sun and, despite the altitude, in summer it can be very hot between the hours of 10 a.m. and 4 p.m. Don’t forget to check our Short Guide for Hikers.

1. The easiest and the most popular trail starts from the town of San Benedetto in Alpe (495 m.a.s.l.) that you can easily reach by car from San Godenzo through the mountain pass called “Passo del Muraglione”.
Here starts trail 407 which climbs up along the river until the famous waterfall (720 m.a.s.l.).
It will take you around 1,30 – 2 hours to hike over the trail.
For the return journey, follow the same route.
This trail reveals fragments of natural history: from the origin of the rocks to the formation and evolution of the waterfall, to the stream and the dominating vegetation.
In this valley, the mountain features, the woods, and the waters convey a feeling of magnificence and immutability.
The rocks we can see among woods and meadows, the sometimes strange and unintelligible shapes of the territory can tell the events that have generated the valley.
In order to better understand the natural aspects of the area, you will find several observation points along the trail.
2. This trail is an interesting alternative, especially in the cooler season. From the Muraglione Pass (907 m), follow the path along the main ridge (CAI 00) through Fiera dei Poggi, which is a plateau that once hosted a livestock fair for shepherds and traders who lived in these mountains during summer.
Once you reach trail 419, descend into the valley, crossing over the 419A into the valley. You will get to a deserted village which is situated in the picturesque grassland basin between the mountains. The route, which is mainly downhill, will take approximately 2 hours, while for the way back you should consider around 2,30 – 3 hours.
In medieval times, this village hosted a hermitage, which was dependent on the Abbey of San Godenzo. Behind the village, you’ll find Acquacheta waterfall.

3. Those who are up for a challenge can reach the falls, starting from San Godenzo (400 m.a.s.l.) and reach Colla della Maestà (1009 m) via trail 10, which starts from the first bend in the highway and runs along the village of Castagneto. This path is recommended in spring and fall.

**For further information or organizing a hiking, please do not hesitate to contact our staff!!

THE NATIONAL PARK OF THE CASENTINO FORESTS, MONTE FALTERONA AND CAMPIGNA 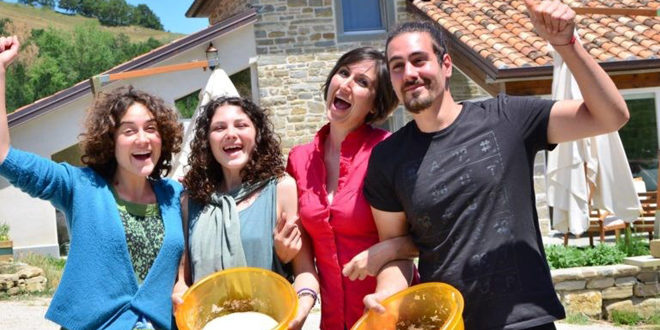 How you can help us growing

Activities, Fattoria dell'autosufficienza, Things to do 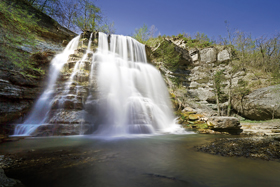