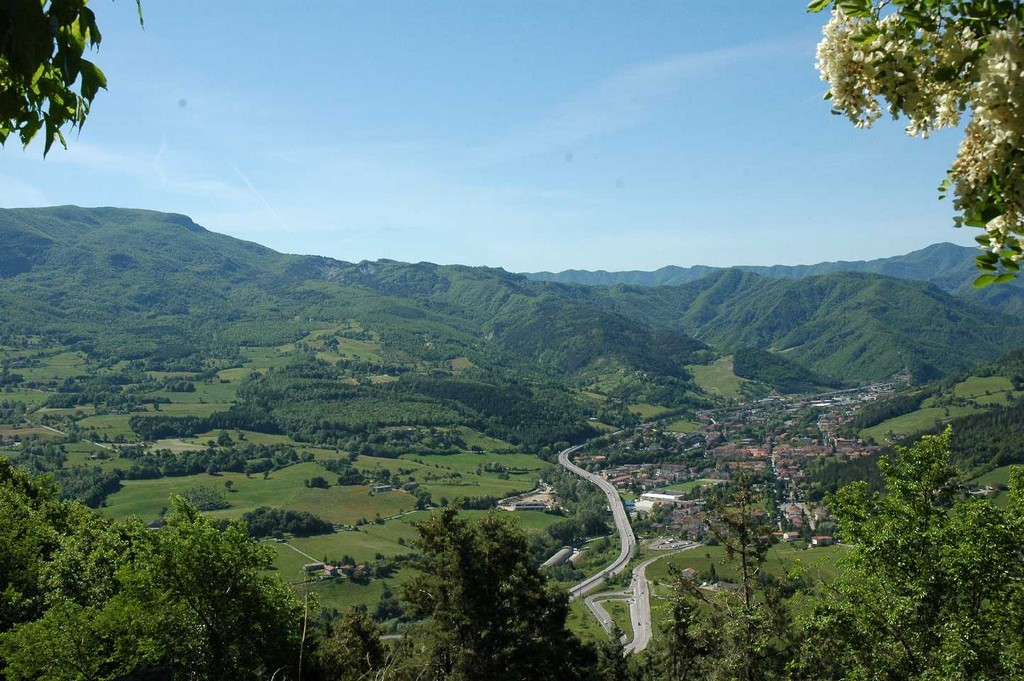 Bagno di Romagna is a small town of 6,085 citizens located in the Savio Valley between 339 and 1,500 m.a.s.l. It is 50 km distant from Cesena and only 5 km from the Farm.
The city of Arezzo is only 66 km away from Bagno di Romagna and this explains why for a long time this town had been a place to stop and rest for the many travellers who crossed the Apennines pass from Romagna to Tuscany and vice versa.

The territory of Bagno di Romagna mainly develops in the Savio Valley and part of it in the Bidente Valley up to the Apennines ridge on the border with Tuscany. Historically it is part of the so-called “Tuscan Romagna” because from a geographical and cultural point of view it belongs to Romagna, but actually it was under the control of Florence for many centuries.
The Tuscan influence can be still found in the architecture of houses, government buildings and stone villages, as well as in the dialect spoken and pieces of art.
Only 144 of the total 23,344 hectares of its territory are inhabited. The remaining part includes lakes, valleys, cultivated fields, mountains and centuries-old woods.
Actually part of its territory belongs to the National Park of the Casentino Forests, Monte Falterona and Campigna and I ensure you that there’s nothing better than hiking and then resting in one of the thermal spas of Bagno di Romagna.

The woods around Bagno di Romagna are thought to be populated by gnomes, elves and fairies and the municipality decided to honour these beliefs by creating the “Gnome’s Trail”  “Gnome’s Trail”, (Sentiero degli Gnomi): a one-hour-long walk where nature and fantasy meet each other.

However, when talking about Bagno di Romagna the first thing we think of is thermal spas. Even the ancients considered its waters as a God’s gift.
Nowadays geologists explain us that these waters aren’t a God’s gift but in some ways they are a sort of little miracle. Indeed they are the result rains that fell in the central part of the Apennines over 10,000 years ago.
During this time the water went through the subsoil, got warmed thanks to the geothermal effect and got rich in active natural elements such as sulphur, bicarbonate, sodium, potassium, calcium, magnesium, fluorine, chlorine, lithium, manganese, iron and ammonium. Finally the water got back to surface through a fault to Bagno di Romagna, where it springs at a temperature between 39°C and 47°C.
The resulting water contains trace elements which are present in out body too. It’s a medicinal water that can positively influence our body condition and prevent some diseases.
At the moment this thermal water ancient as the Romans is available to everybody in 3 modern spas:
Terme S. Agnese,
Terme Roseo,
Euroterme.

Who knows, maybe in the future we will discover hot springs even at La Fattoria dell’Autosufficienza! 🙂

HISTORICAL AND CULTURAL PLACES:
• The cathedral of Santa Maria Assunta on the main square of Bagno di Romagna that dates back to the Renaissance. Its bell tower is 39-metres high and the cathedral itself is full of pieces of art, so it’s worth to be paid a visit.
• “Palazzo del Capitano”, a historical building where used to live governors that Florence sent here to run the local government. The National Park Tourist Office is located inside this building.
• The war memorial of Carnaio
• Shrine and Catsel of Corzano – Madonna col bambino (1,450 m.a.s.l.)
• Pietrapazza Valley
• the village of San Piero in Bagno.

REMEDIA: a natural laboratory that is woth to be discovered

HORSE RIDING THROUGH THE WOODS